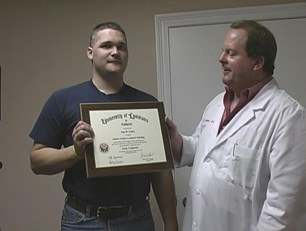 February 2003 – A 22 year old male Louisiana State Policeman was involved in a motor vehicular accident on Feb.. 15, 2003. A metal pole pierced his skull on the right side. He underwent a craniectomy of his right frontal, temporal, and parietal areas. His prognosis was not good. He was told that he would never regain the physical capacity to walk or drive a car. He was also told that he would not be able to go back to college due to his lack of speech, cognitive, associative and memory skills. The patient was informed that the dysfunctions that remain one year post injury would be permanent.

On June 17, 2005, two years after his traumatic brain injury, the 24 year old patient presented with a stroke like pattern of paralysis of his face and left side of his body. The patient’s left arm dangled and was motionless. His left lower leg (gastroc & soleus muscles) and foot were in spasm forcing his foot in a permanent pointed position (plantar flexion). The patient could walk for short distances with difficulty using a foot brace and cane with a stroke like hemiplegic’s gait. The patient also complained of difficulty with balance while standing and walking. For longer distances the patient would use a wheelchair. Patient presented with vision loss in his upper & lower left quadrants. Patient was able to speak clearly, although he delayed in answering questions. His physical reaction time to movement instructions was also delayed. Patient presented with cognitive deficits, such as losing his train of thought in the middle of his sentences.

The patient is now a College Graduate from the University of Louisiana at Lafayette with a degree in Industrial Engineering, graduating with a higher GPA than before his injury. The patient now walks with a near normal gait with proper heal strike. He no longer uses a Cane, Brace or Wheelchair. He still has difficulty bending his left knee on initiating his step. Patient can perform over 20 lunges alternating legs. He can also perform over 30 squats. Although the patient may delay to answer when asked questions, his speech, cognitive, associative and memory skills have returned to normal function. The patient recovered his vision in the upper and lower left quadrants. And he has received a State driver’s license. The patient can lift his left hand over his head. He has ability to flex and extend his elbow. He can partially flex and extend his wrist. His left hand remains contracted at this time. With continued care the patient is expected to live life independent of caregivers and with minimal disability.